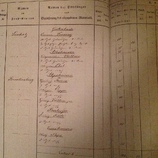 Our building was originally recorded in the Hanoverian land registry towards the end of the 18th century. The record shows a note of ‘just completed’ in the year 1783.

The simple Baroque building was constructed, under the regency of George III, King of Great Britain, Ireland and Hannover, Elector of Brunswick (Braunschweig) and Luneburg, as the residence of the forest ranger in Mollenfelde (Head Forester’s establishment). The forest ranger had petitioned his employers over many years to grant permission for the building of a house on the edge of the forest rather than in the centre of the village. One reason, he argued, was that he would be better placed to track down poachers and timber thieves from the adjacent Hessenland.  The house boasts high-ceilinged, handsome rooms and the building is a gem of the late Baroque style. The entrance hall has two original, sandstone, open-fireplaces which were certainly in constant use in the cold seasons of the year.

Due the turbulent territorial history of Germany, the house was subject to regular changes. Finally, after 185 years, initially as the Head Ranger’s premises and later as the Forest Ranger’s office for the State of Lower Saxony, the property was purchased in 1968 by the master baker Kunkel from Berlin. He founded the European Bread Museum and accumulated a very valuable collection pertaining to the trade of baking. This publicly accessible museum was a well known destination for excursions and it is still remembered to this day.

In 1999 the European Bread Museum moved to new premises in Ebergötzen close to the Wilhelm-Busch Museum.

Since 2002, this historic building has been lovingly and appropriately renovated to an ecological standard. It combines the comforts of modern living standards (e.g. thermally insulated with wood-fibre insulation and heated using a wood pellet fuelled central heating system) with the charm of the traditional and historic, with all its period ‘imperfections’.